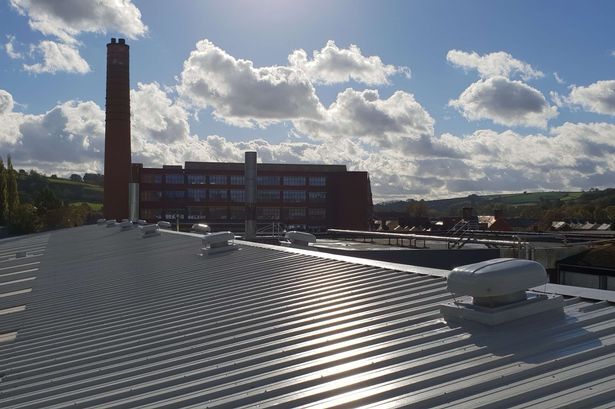 Devon Contractors successfully completed a re-roofing project across one of Heathcoat Fabrics’ production areas. The new roof was installed to facilitate the addition of new equipment currently prohibited by the low existing roofline. This will enable Heathcoat Fabrics to expand and meet the needs of its growing product range.

Business Project Manager, Alison Kitchener – Heathcoat Fabrics said: “We had at least three contractors turn this project down because of its complexity, and on speaking to a number of colleagues they all said that we should contract Devon Contractors because of their reputation, resources and technical knowhow. I must admit that it was very much touch and go in the early stages, as even Devon Contractors were not sure if the project could be delivered in the extremely tight timescale and fixed window of our summer shutdown.”

She added: “From the outset we made it clear to Devon Contractors that the key to the success of this project was in keeping production operational with little, or no interruption. Happily, the works went even better than any of us expected; the weather was kind which was a major factor but also the choice of site management, and I personally think this went a long way to producing a very pleasing result. Safety of operations was paramount and clearly demonstrated via the excellent safety audit reports forwarded on to us.”

Exeter-based Taylor Lewis Limited was engaged by Heathcoat Fabrics Limited to act as the Contract Administrator and CDM Principal Designer on the project. Peter Owens, Senior Associate said: “The first task was to help to engage a contractor who was capable of carrying out the works with as little disruption to the client’s activities and as safely as possible. Taylor Lewis compiled the contract and CDM documentation and administered the contract until its completion. The project faced many challenges but were overcome with great collaboration between the client and Devon Contractors and it was completed on time and within budget.”

Andrew MacManus, Engineering Director concludes: “Devon Contractors were professional in their approach to all aspects of the project – if there was an issue it was quickly dealt with and resolved to our satisfaction. The contractors on site were courteous to our staff members and co-ordinated well with them in operational areas resulting in very minimal disruption. It was a pleasure to have their team on site and as a result we would be keen to work with them again.”